The Art of Business at Conrad NYC

In the old days, the phrase “business hotel” brings to most people images of sterile marble lobbies, of businessmen trying to impress each over hotel breakfast, and of frequent-flyers efficiently going in and out of hotel elevators, one hand firmly on their TSA approved wheelies while the other holds on a smartphone, thumbs dancing across the screen. 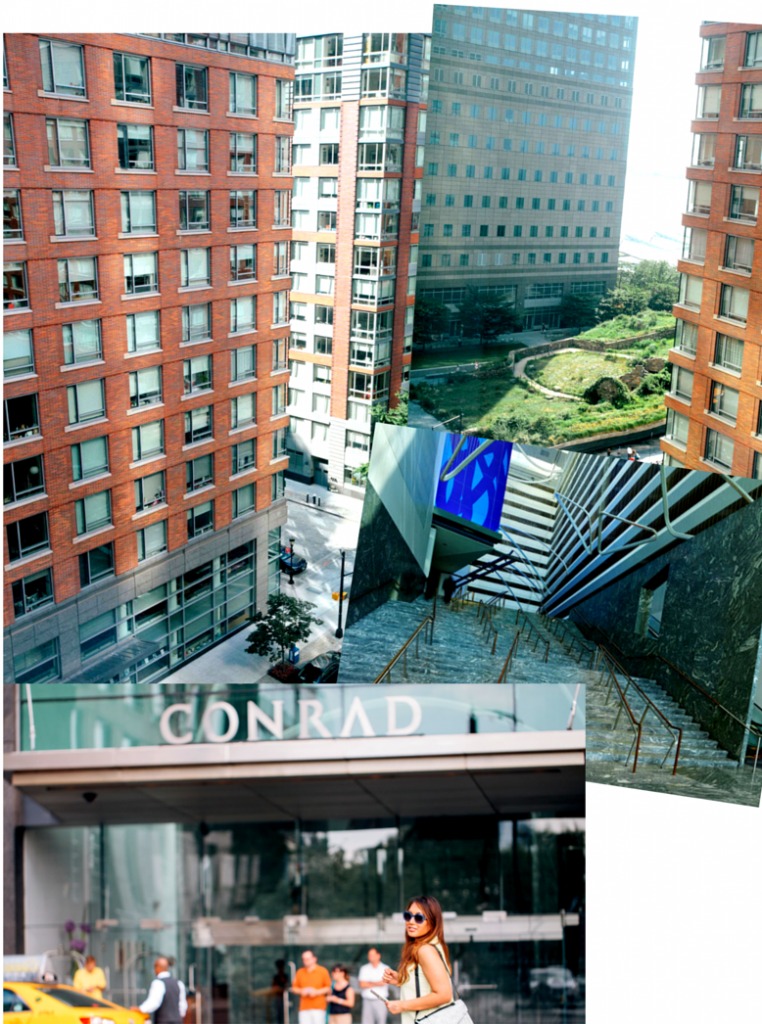 Not the Conrad hotel. While still a business hotel,they know that nowadays, most executives and businesspeople are so busy that they don’t separate work and play. From anecdotal observation, I notice that successful, workaholic A-types like me who travel for business try to integrate some non-work activities when traveling for business meetings and the Conrad is savvy on this trend. 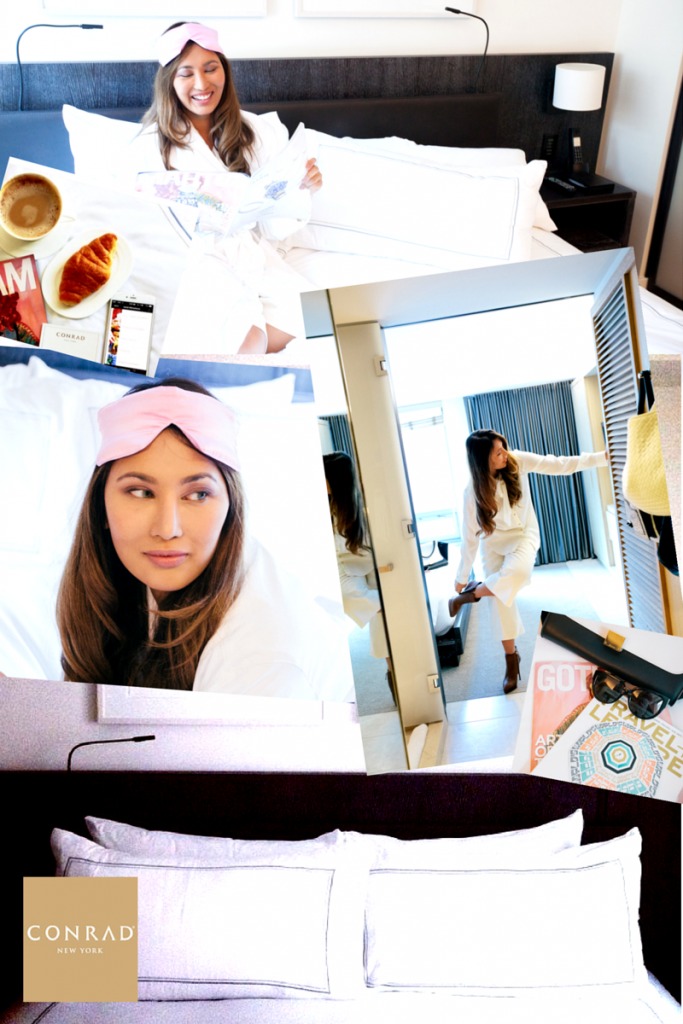 The Conrad NYC is located in the Financial Business District and has the most dramatic entrance to a lobby I’ve seen in the city. Walking towards the entrance of the modern glass and steel-structure, you are greeted by a sea of beautifully chaotic jade-green marble. And as you walk up the stairs ( or take the lift or elevator) floating geometric steel clouds surrounded by a gigantic wall-to-wall blue mural ( Loopy Doopy by Sol DeWitt) visually arrest your senses. If that’s not enough, the most gorgeous fragrance, piped-into the hotel’s conditioning ducts, start to make their presence known to your olfactory senses. 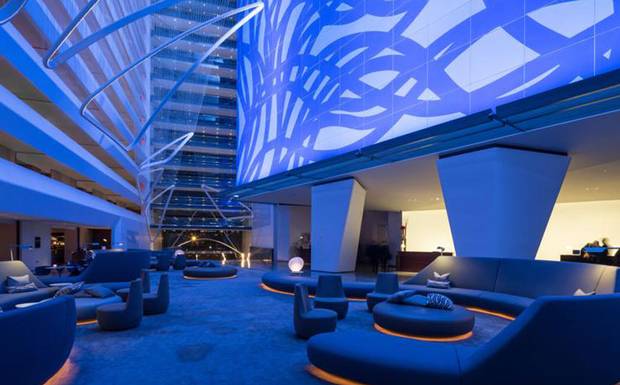 And that’s how you win over a tired business traveller at hello.

The hotel has over 2000 original pieces of modern art work (all curated with the help of New York’s Public Art Fund), some of over-the-top proportions and some of such modest size you would have missed it if you did not look at the hotel’s Art Guide, available in all their guest rooms and suites.

I was in NYC for a 5 day blog conference in midtown as well as meetings with clients all over the city but managed to sneak in a photoshoot or two (lol) as well as explore the hotel throughly.

Here’s what I really love about this hotel (and why you should stay here when you visit NYC):

The artwork! I’m very visual by nature so this in itself is such a feast. No matter how tired I was from dealing with manic New York types the whole day, every time I go up the escalator into the soothing blue heaven of a lobby I feel rejuvenated. 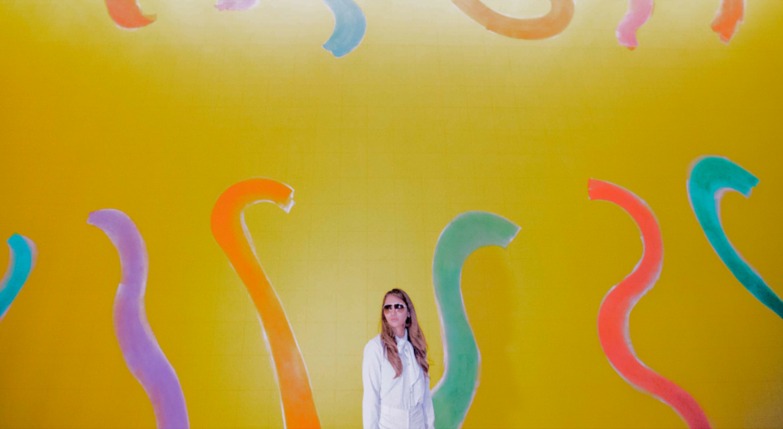 The second thing I really like about the hotel is its award-winning Conrad Concierge app ( available for iPhones, iPads and Androids here.). From simple requests like wake-up calls to in-room service to transportation or even access to a real concierge, this app does it all. So why is this so much better than calling a person directly? Because you can now schedule turn-down service  (while waiting for your client who is 20 minutes late) or have room service waiting for you when you get back (because said client ordered some weird avant-garde gourmet concoction that tastes like expensive bubblewrap). Also I just prefer apps rather over calling someone on the phone. I’m milennial that way.

The Loopy Doopy rooftop bar is a wonderful social spot. Named after the gigantic blue mural by Sol DeWitt in the lobby, its main attraction is its sweeping view of the Hudson river, and its iced prosecco pops. It gets crowded on Friday and Saturday nights but guests have priority access, so the wait is bearable at 15 minutes on crowded nights. If you’re not into standing-in-line, late weekday afternoons are your best bets. You’ll also avoid giggling 21 year olds Instagramming countless photo after photo of their prosecco pops. There is nothing wrong with this at all, except by the time you got your prosecco pop, Instagramming it feels lame. 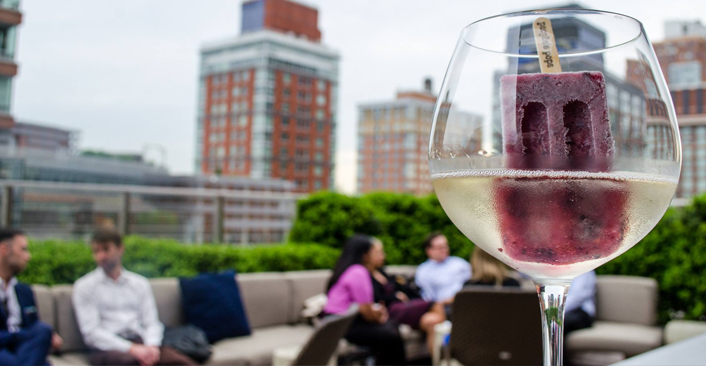 At it’s heart its still business hotel. Beneath the polished veneer, the hotel is all about making travel efficient and effective for its discerning guests. Fast complimentary wi-fi throughout the property, a top notch 24 hour business center , multiple gorgeous gift stores in and around the hotel  and for the men – a traditional barber service, it’s all taken care of.

And here’s the kicker – the hotel has a secret movie theatre. Okay it’s not secret but rather, it’s a bit out of the way, tucked 5 floors up from escalators all the way at the back of the hotel. I didn’t get to watch a movie there this time around but I just like the idea that if I could not get to sleep one night because of jetlag I can just go down and watch a movie on the big screen. 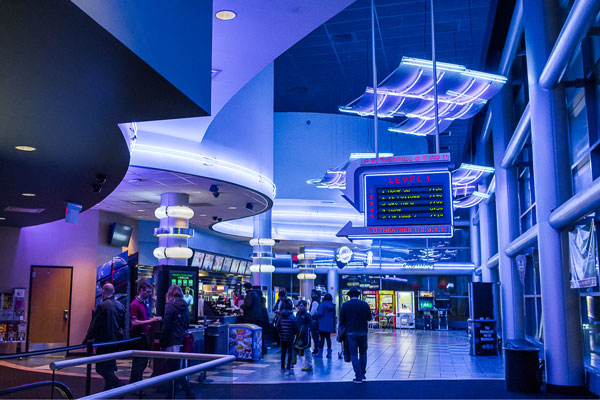 The rooms are NYC-chic beautiful, with views of either the Hudson river or the downtown LA, and the sheets felt like silky liquid sleep. All rooms come with a separate sleeping and living area – a 3 seater sofa and large coffee table so you can bring people up for quick informal chats or work meetings.

So in summary I LOVE this hotel and would stay here again and again, but should you? Here are some considerations:

Check your itinerary. If most of your activities are uptown/midtown, you have a tight schedule and you don’t like subways, this hotel’s location can be inconvenient at times. NYC peak-hour traffic is a beast and Iv’e experienced 2 hour rides for what should take 20 minutes.

There are tourists (non-hotel guests) and school children in the hotel lobby. First of all, please remember that the hotel lobby is VAST. There is a lot of people around, yet it never feels crowded or too noisy. But relatively speaking (when compared to let’s say, another hotel that does not have world-class art on its premises) there are slightly more people. I actually like the fact that the hotel has public-accessible art.

You like bath tubs. The standard guest room in this all-suite hotel does not have a bathtub. Yes, the bathroom and shower areas are large, but there is no bathtub. However this is the second luxury hotel in the city that does not have bathtubs standard. 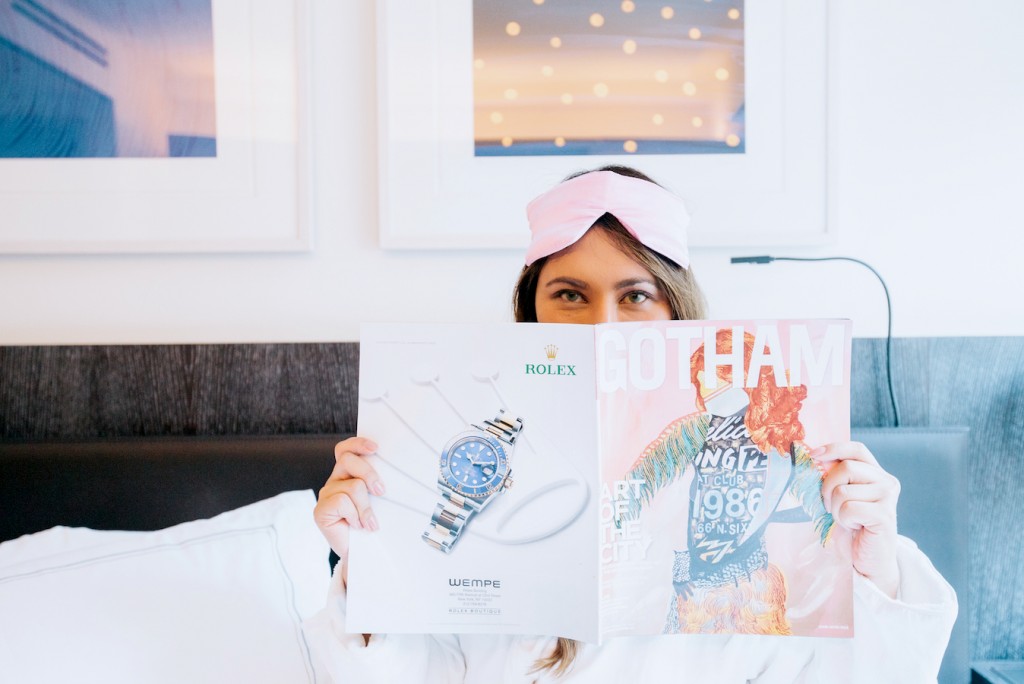 What: The Conrad New York hotel is part of the Hilton group of hotels, and is a 5 star luxury hotel with a stunning 16 story lobby featuring a gorgeous mural by the artist Sol De Witt.

Where: The hotel is at 102 North End Ave., near Vesey and Murray Station. Go to ConradNewYork.com for more information.