This is a guest blog post by Nicole Wright.

Whether your doing Coachella for the first time, escorting a teen, or a veteran, there is a certainly a definitive “look.” Not only for style, but for practicality. When it swells in the low desert, it swells. Temperatures on average, in mid-April are in 90’s, but then can drop to the low-60’s at night.

Let’s get back to Coachella’s roots, going strong since 1999. The Coachella Valley Music and Arts Festival (commonly referred to as Coachella or the Coachella Festival) is an annual music and arts festival held at the Empire Polo Club in Indio, California. The event features musical artists from many genres of music, including rock, indie, hip hop, and electronic dance music, as well as art installations and sculptures. It has become just as much of a destination on the first weekend, for music, as it is for celebrities, fashion and parties.

Light colors, whites and beiges, crochet and lace, hats and colorful jewelry rule. I’d like to think that this “all black everything” is just a phase, perhaps defiant, that seems to be trending at festivals, but after all, rock n’ roll, is rock n’ roll. The black outfits with cutouts and tears in otherwise in way too close proximity to a lot of body parts, well, it’s just not very inventive. Sexy, maybe – depending on what you’re going for and your body type. The “millennial” set seems to think this looks good, but it’s not quite Electric Daisy yet. Doc Martin’s, yes! These are cool and comfortable. If anyone can recall their first set of 14-eyes, then your with me.

Making the voyage to Coachella is long and expensive.  A VIP 3-day ticket will now set you back $1,000. By the way, Jet Blue and Virgin America both have non-stop flights in the high season. Palm Springs International has been named “American’s Most Stress-Free Airport.” I have a whole list of Palm Springs “go-do-see’s,” but off the top of my head, one of the most coveted boutiques in town, is Lindy California, a store offering uniquely curated vintage items of special pedigree.

So who nailed it, in the style department at Coachella? Supermodel and icon, Alessandra Ambrosia, who turned 36 just last week on April 11th, completed her looks wearing much of her own label, Ale by Alessandra. 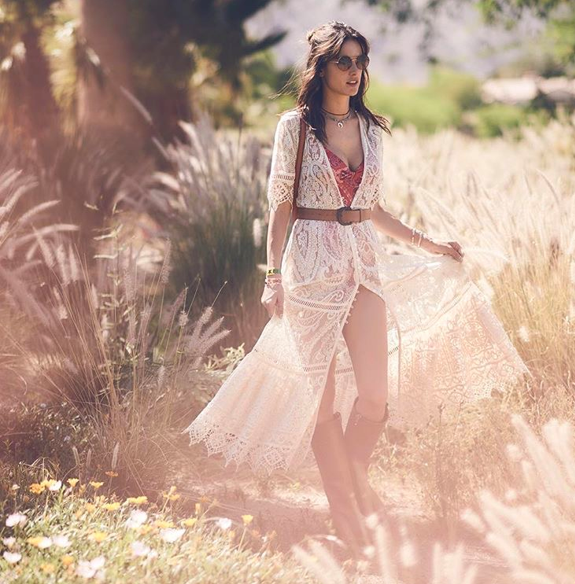 Her 8-year old daughter, Anja Louise performed for her first time and took to the stage just like her mum. 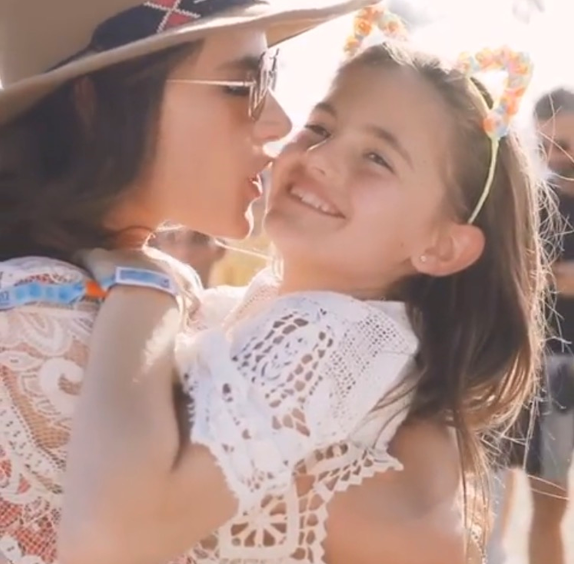 How could you not love the old Rolling Stones t-shirt and black and white two-toned leather jacket? 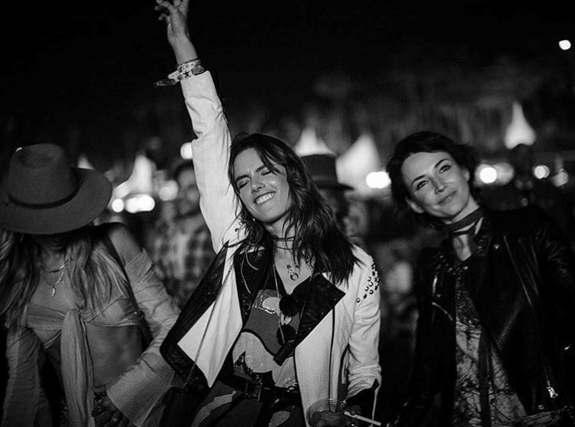 Photo: Alessandra Ambrosio in the crowd at Coachella. Photo by Timur Emek.

Let’s talk about Rachel Zoe, who is known for her “Boho-Chic” style. She hosted a very tasteful party at the Colony 29, in lovely floor-length version of the “Lucille” dress created for Revolve. 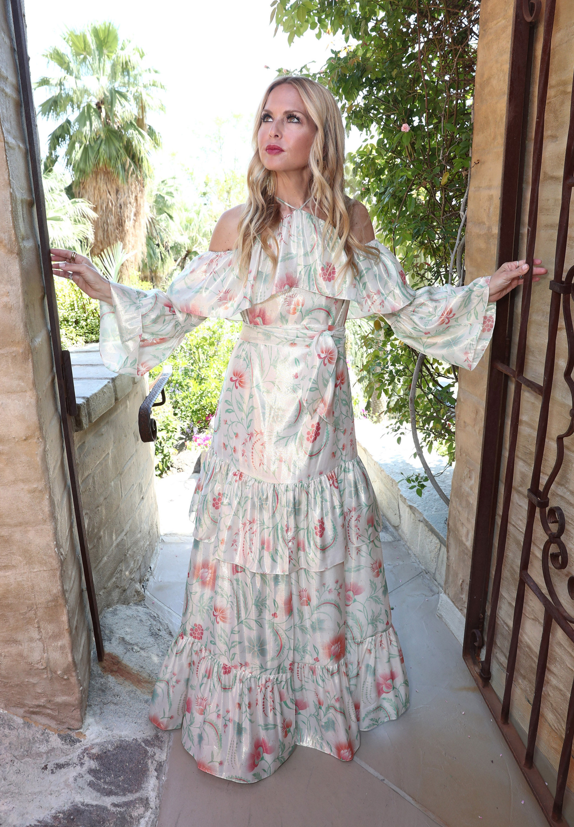 Meanwhile, Actress Kate Bosworth and TV Host Louise Roe, accomplished their looks in head to toe, ready-to-wear Rachel Zoe. Clearly, MCM was the “it” bag  – a square version, which I was happy to see vs. the trendy “bucket” bag every blogger seems to covet. Check out Louise’s “luxe glamping trip” during her stay. To better capture their Instagrammable looks, guests were each gifted Google Pixel phones, paired with the newly launched Zoe-designed case. 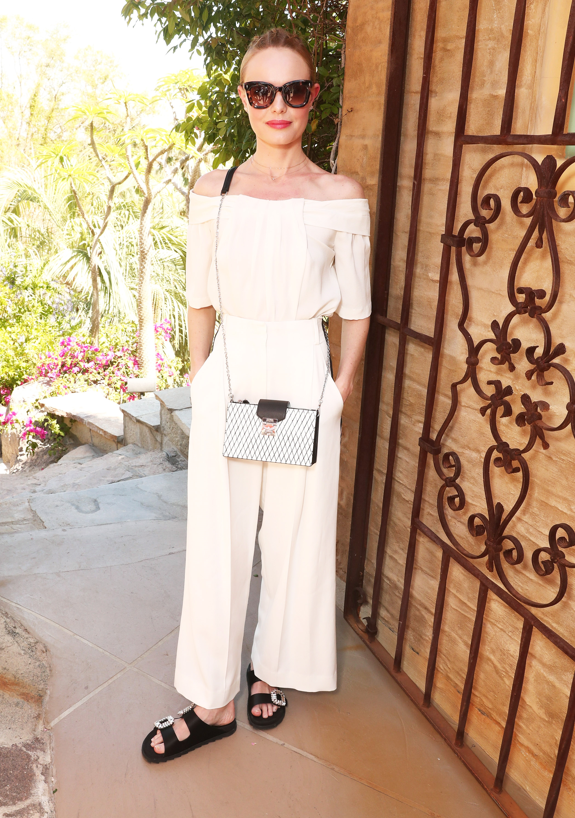 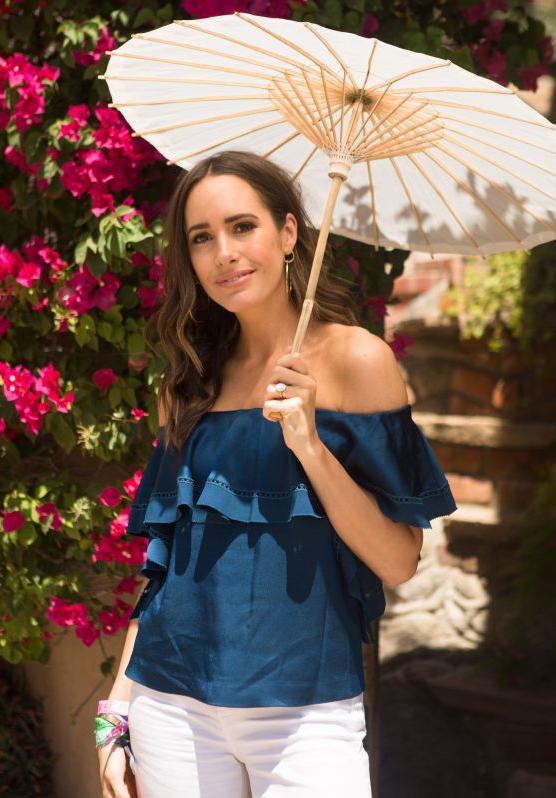 Then there was the PopSugar annual party, hosted at the Spanish Colonial luxury-boutique hotel, the Colony Palms. The activations at this event were super personalized and yes, Lisa Sugar, I am reading your book! We are bi-centennial babes. The colors were popping and loved Victoria Justices’ bold red. Perfectly on point with a hat and chain link belt. 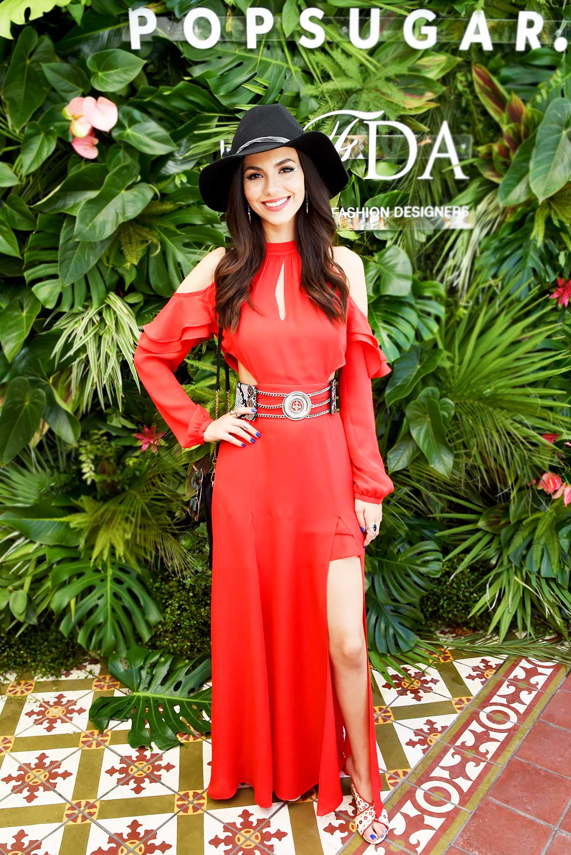 Last but certainly not least, Lady Gaga. She really set the stage on fire Saturday night, with a 20-song set, releasing her new single “The Cure” with just enough outfit changes to excite the crowd, but not too much circus for the festival crowd. Stefani Germanotta rocked an embellished blue jean jacket, with matching sequin multicolored thigh-high boots. Afterall, the fashion is amusing, but we’re really here for the music and what’s on stage is still the main attraction. 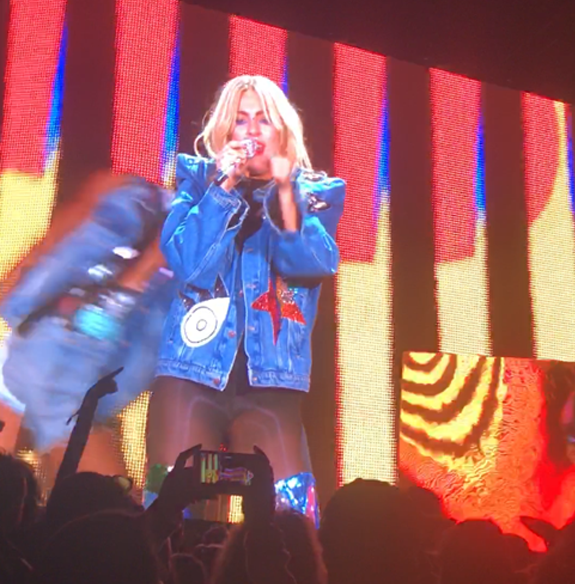 Nichole Wright is a Los Angeles based event producer, who plans corporate, social and philanthropic events, including activations for Bon Vivant Events. Originally, from Texas, she immerses herself in the cultural and arts scene, diving into music, fashion and culinary adventures all over the world. She has written for New York Woman Around Town, The LA Examiner, Guest of Guest, among others.