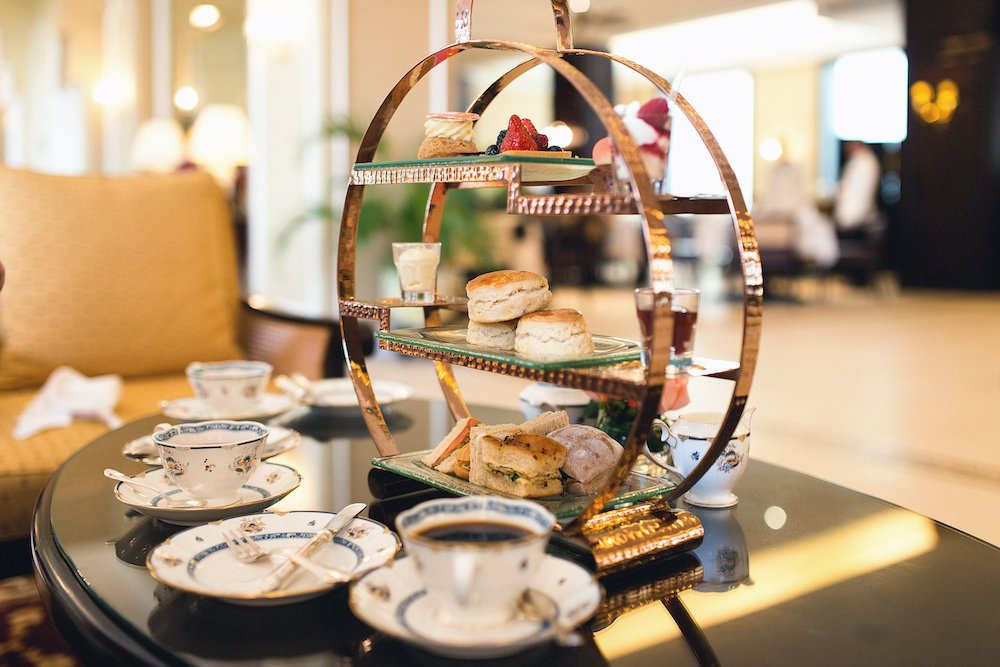 If there’s one more thing I’m head over heels in love with– it’s FOOD! Glorious, glorious FOOD! More so if they look as stunning as the picture above taken back during my stay at The Majestic Hotel. If you’re aiming for that Instagram worthy Foodie Shot or just want to leave your guests drooling with these beautifully set meals, then check out my stylish dining must-haves! 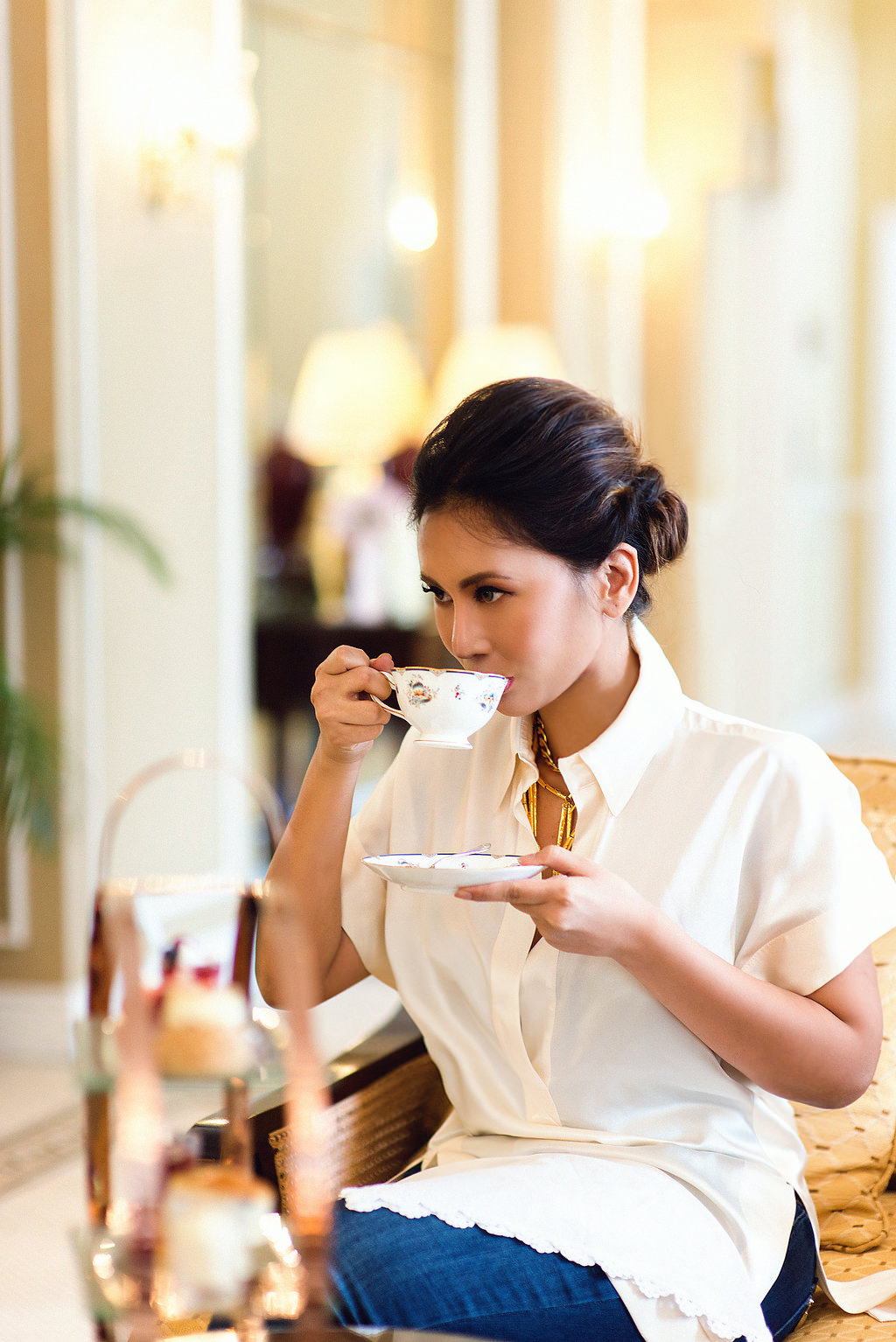 When I thought of “slipping into Armani,” I used to picture my favorite sunglasses and red lipstick. Now that I’ve stayed at The Armani hotel in Milan, I have an entirely new picture and favorite memory. (Not to mention impossible standards when it comes to future hotel stays.) 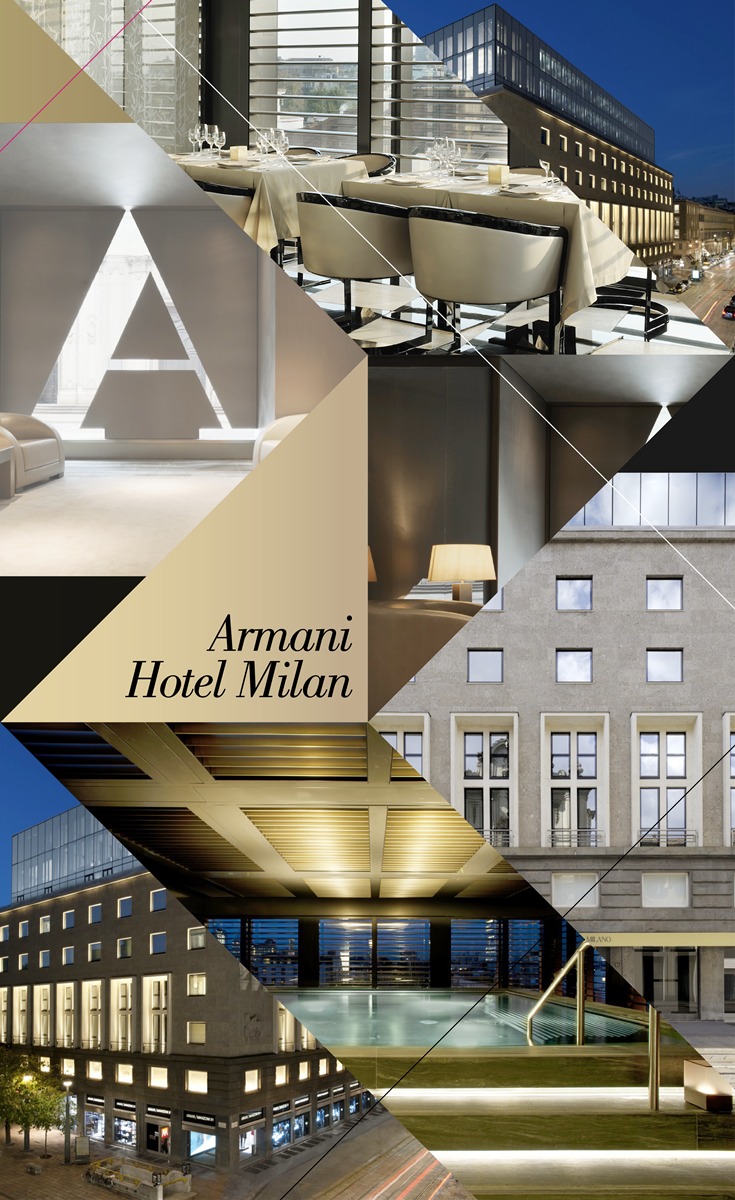 Milan is both host to Milan Fashion Week and Giorgio Armani’s home town which explains both the fact that he’d put his name on a first-class hotel and the fact that it’s on the floors above his flagship superstore.  As anyone familiar with his esthetic can imagine, the hotel mimics the clean, refined lines of Armani’s clothing design.  There is the same serenity paired with attention to detail here at the Armani Hotel that one finds in his classic tailoring.  Picture cool onyx and crisp edges to the furniture.  Toss in hotel employees with impeccable manners and attention to detail and you can understand my enthusiasm. In my dream world I live in his clothes and his hotel year-round. 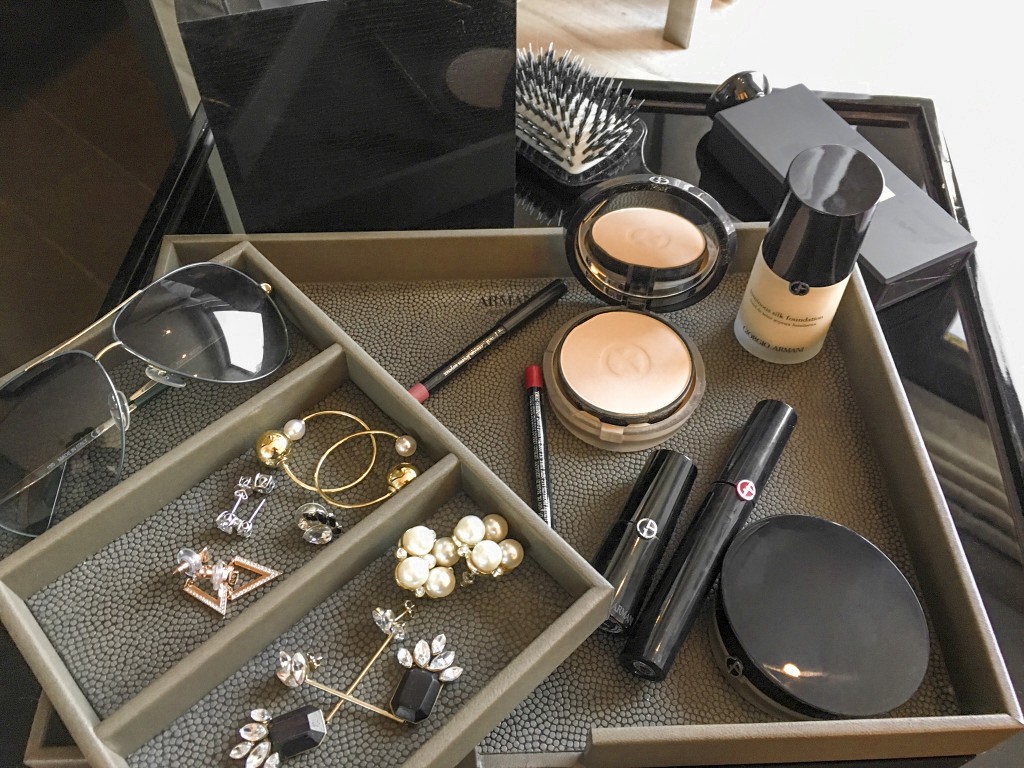 If there’s one thing Armani teaches you – both in fashion and in hospitality – it’s that feeling comfortable makes you feel more self-assured.  I felt relaxed everywhere in the hotel – from the entrance to my room to the spa to the store.  But not in a Miami beach way – in a “I don’t have to try too hard or make a grand entrance, because I am confident that I look and feel good. 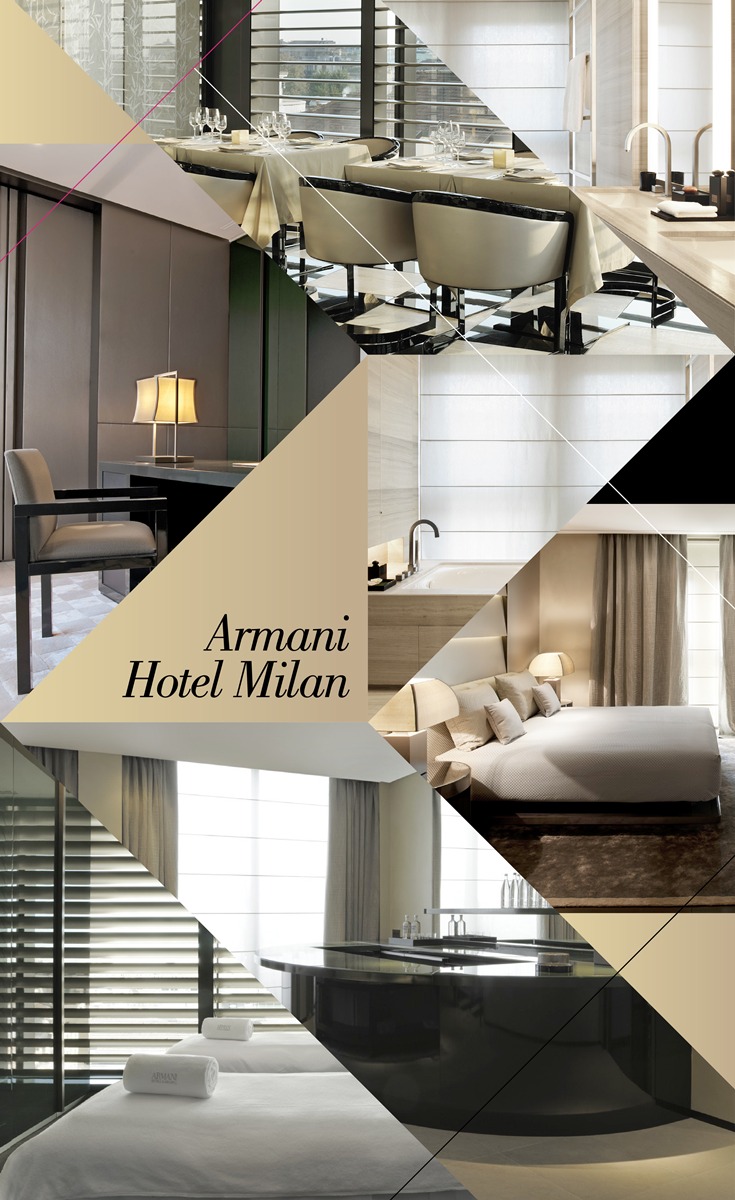 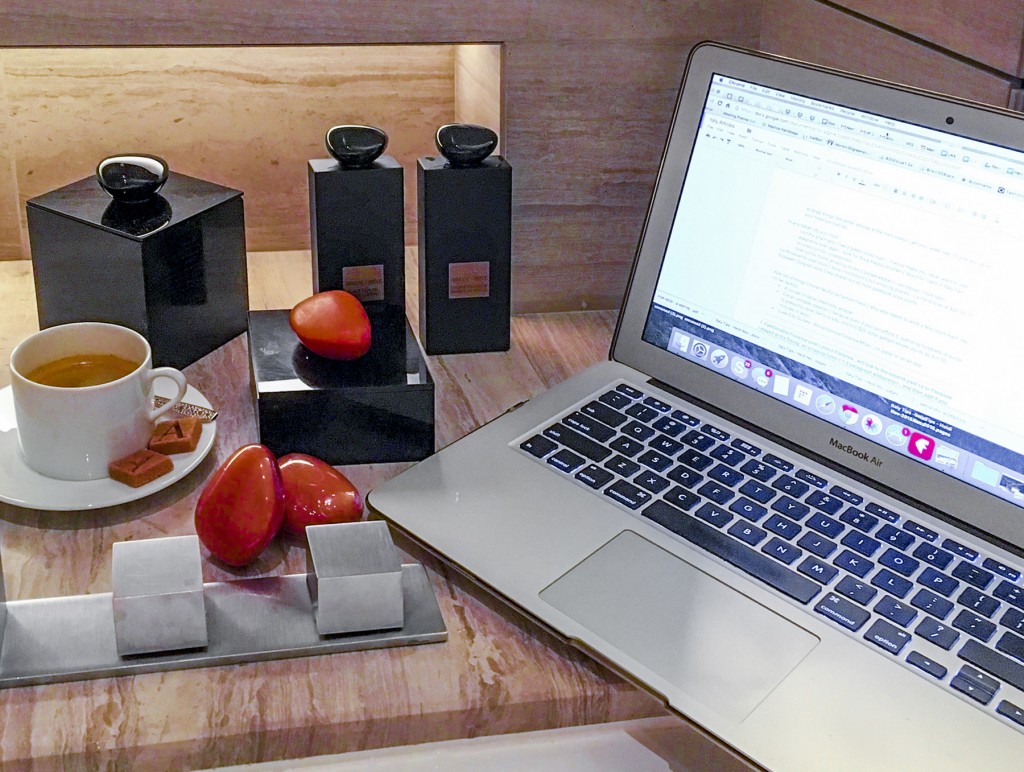 At the hotel, no attention to detail is spared. I love how our room had an iPad I could control every.single.thing with, even order room service or ask the concierge a question. Evety single item in the hotel had been thoughtfully designed by Armani specifically so that being at the hotel made you feel like you were a personal guest of Giorgio himself. And I love that they have a pillow menu – because lets face it, most of us have a very specific way of how we like our pillows. With all this attention to detail, It was very very hard indeed checking out of the hotel when we did. 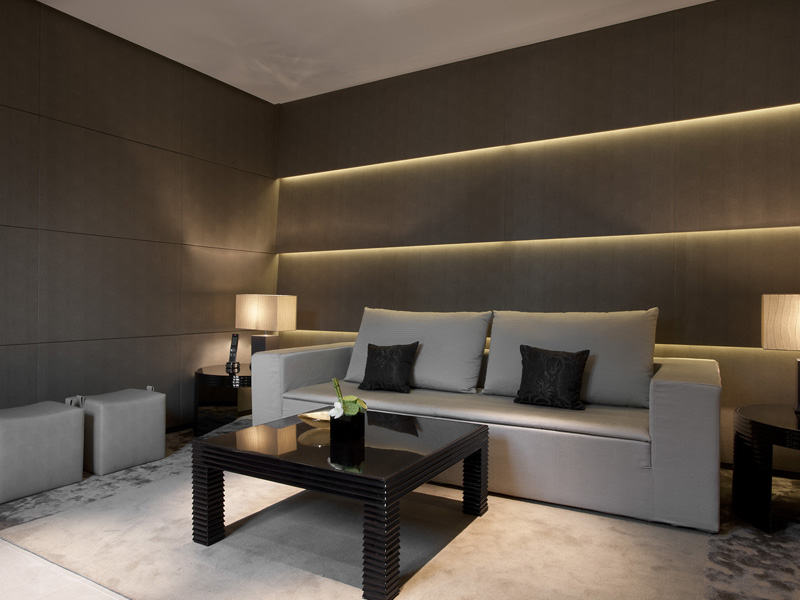 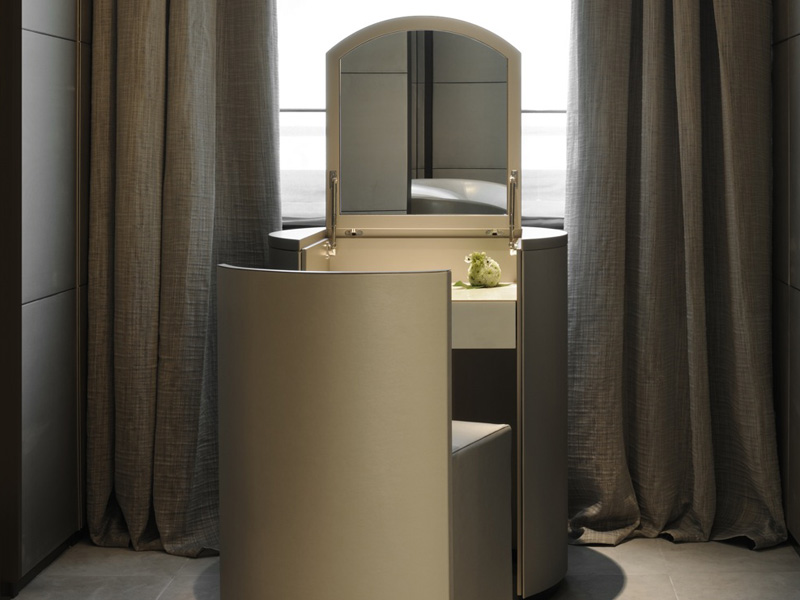 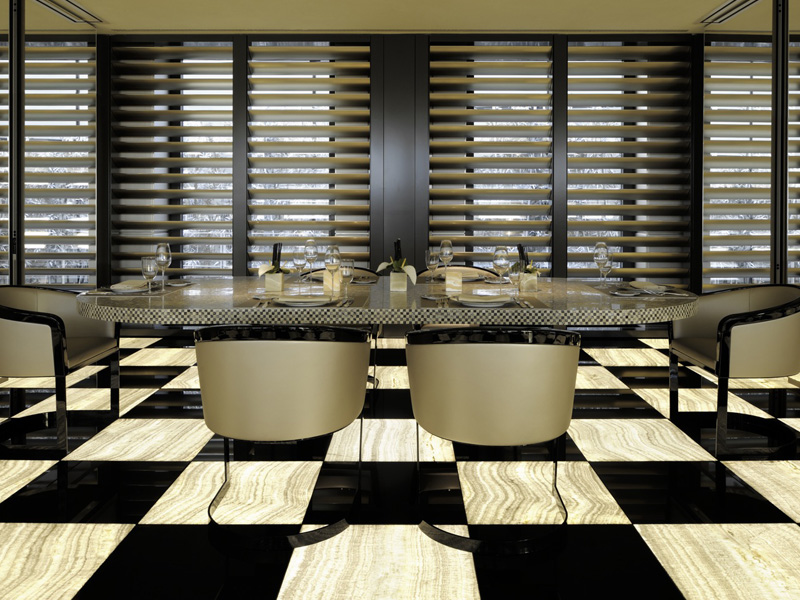 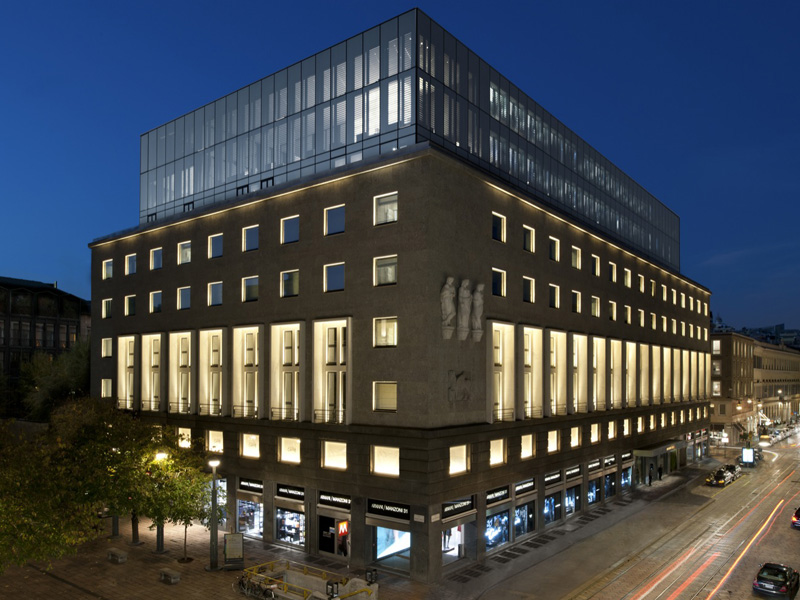 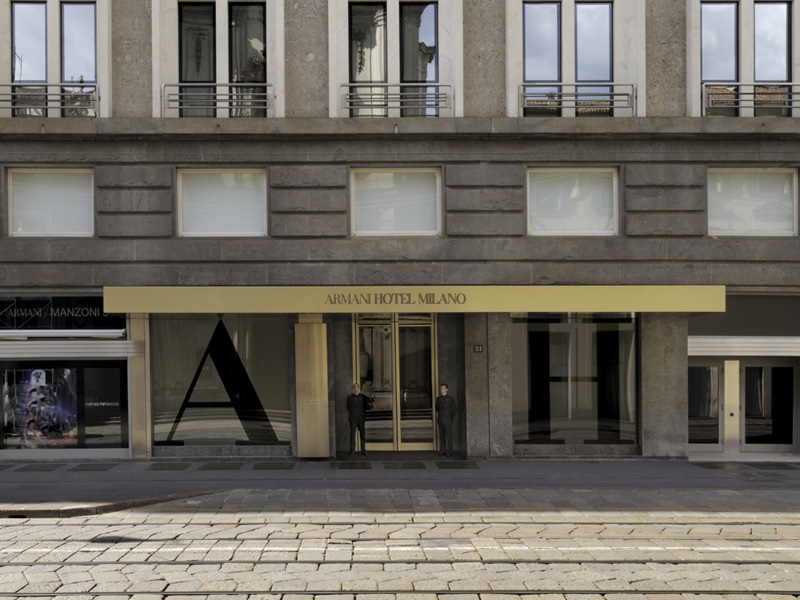 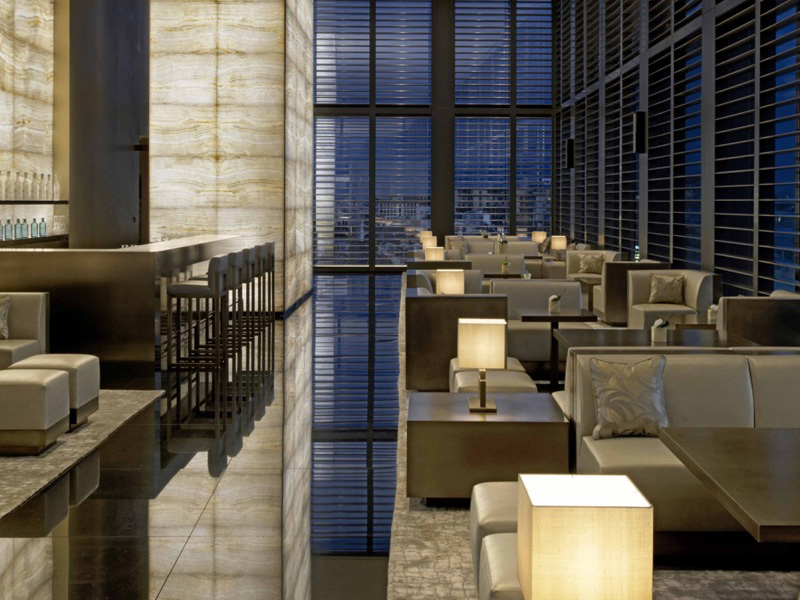 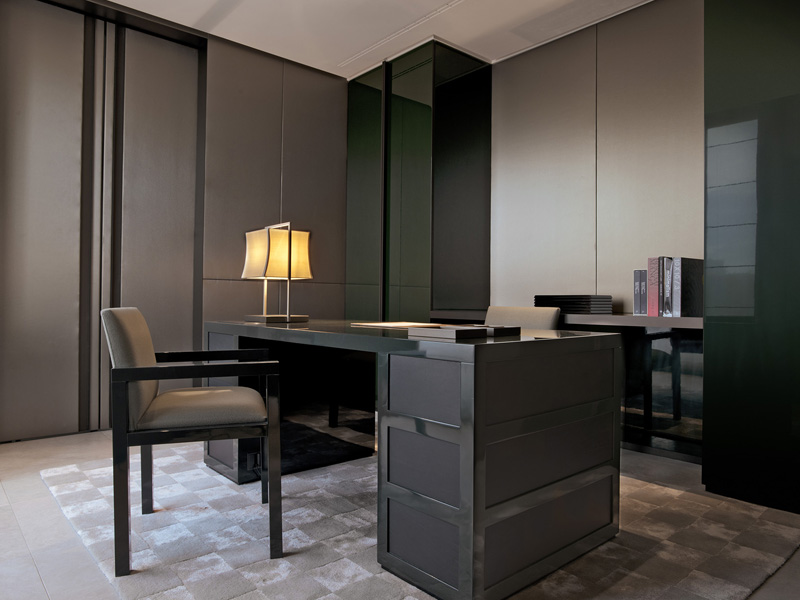 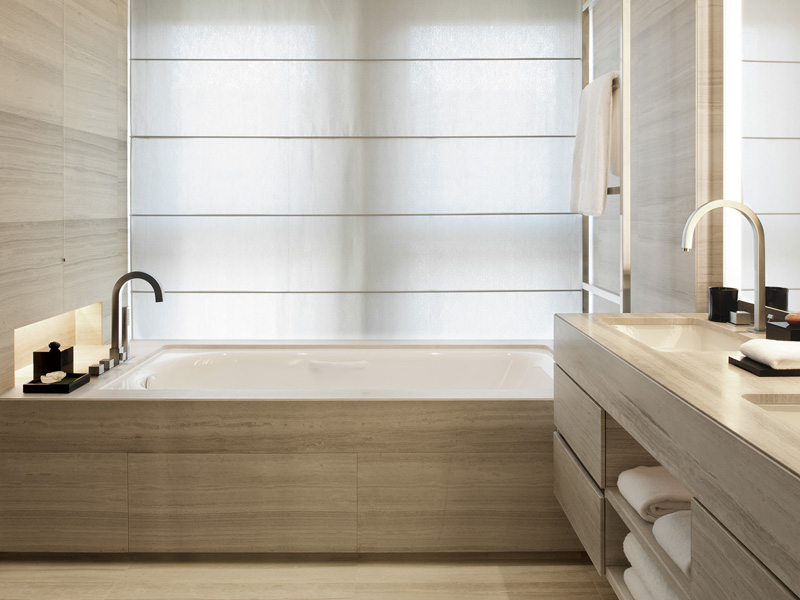 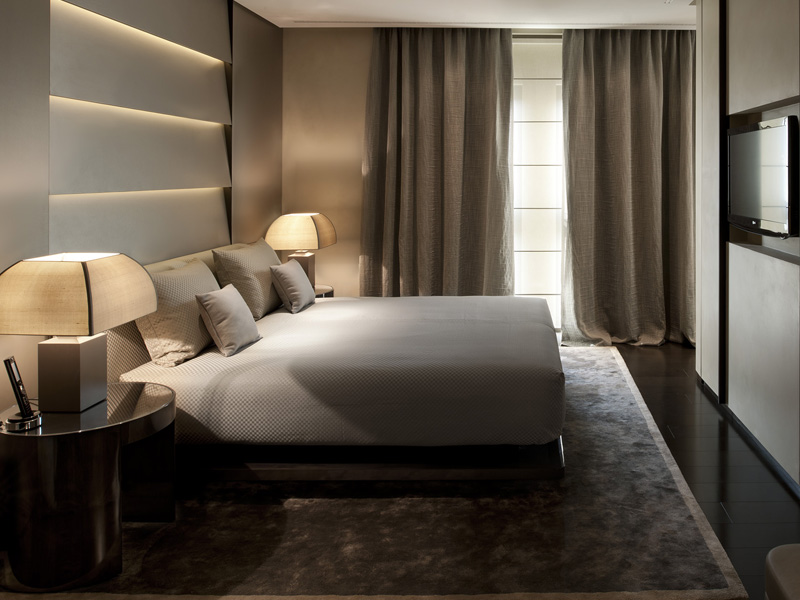 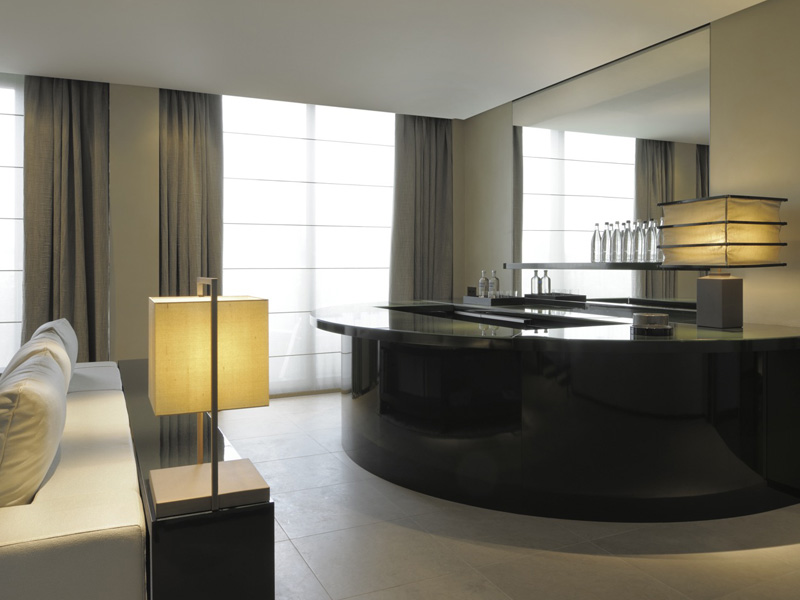 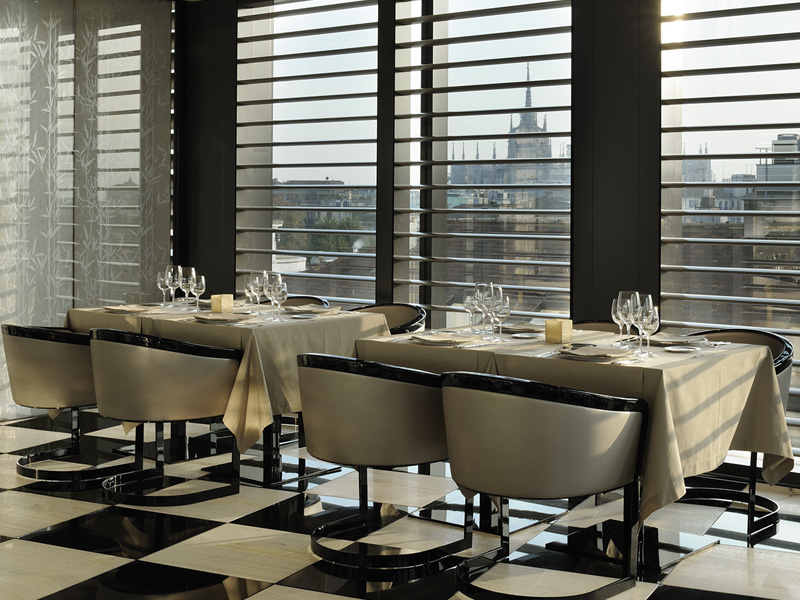 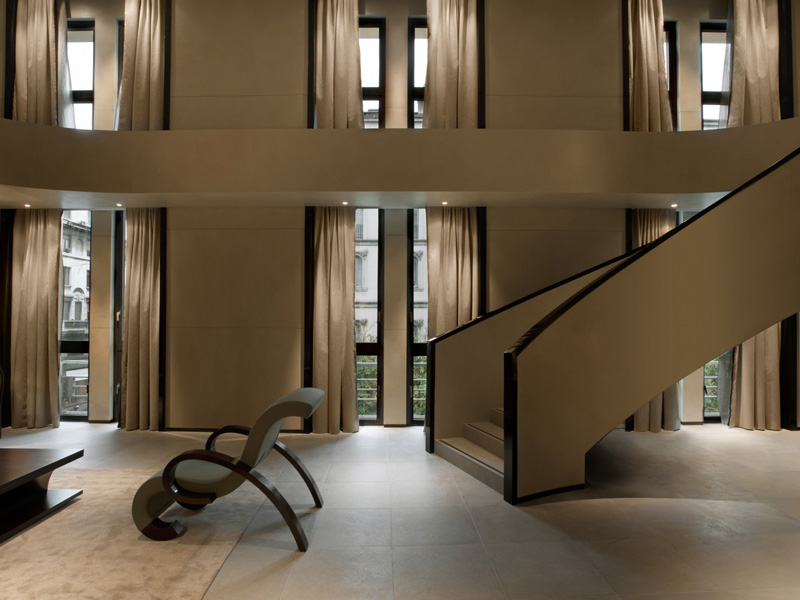 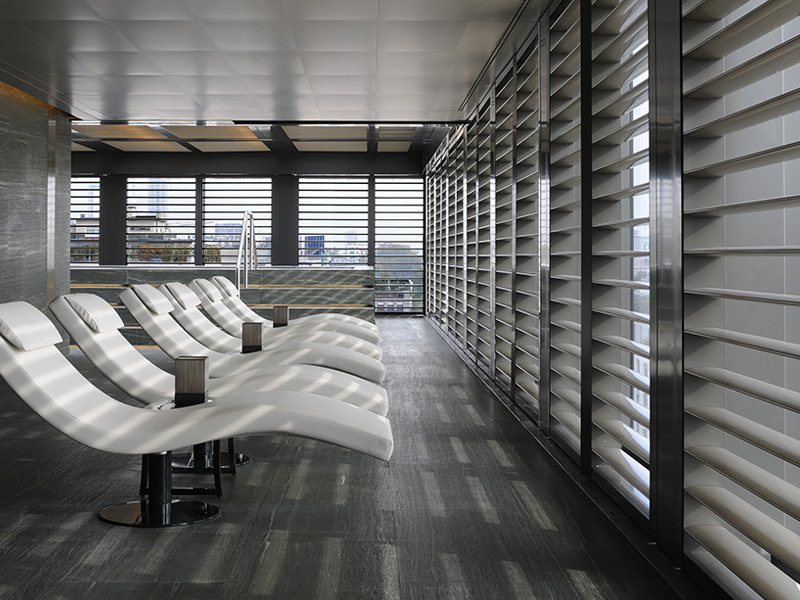 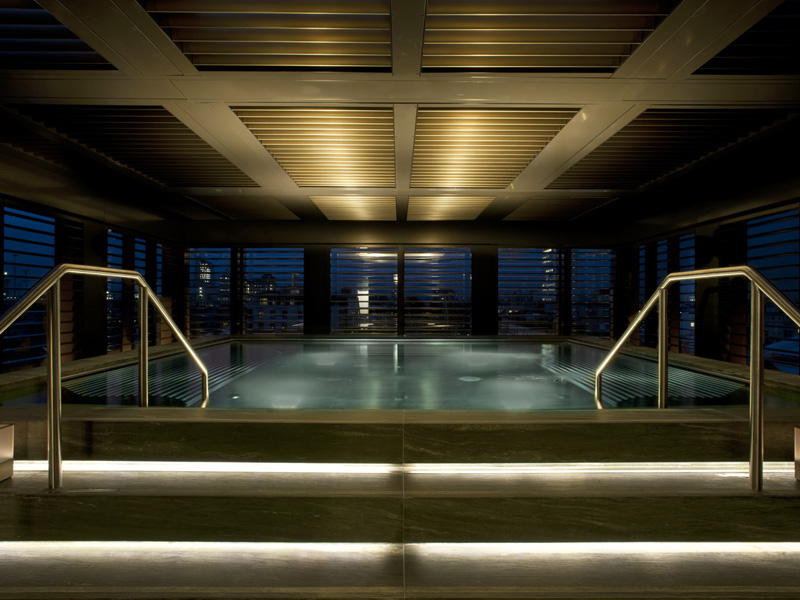 One of the other perks of staying here is access to an Armani makeup artist, a personal shopper to help you out shopping if the two stories of Armani clothing on the first two floors ovewhelm you, and of course, priority reservations at both the Bamboo Lounge and Bar as well as the Michelin starred Ristorante Armani. During  the time i was at the hotel, there were lines outside the hotel entrance to go into bar and I have to admit I felt a little bit smug as I skipped passed the long lines of beautiful people as the doorman waved us inside with a “Ahh, welcome back madam.” 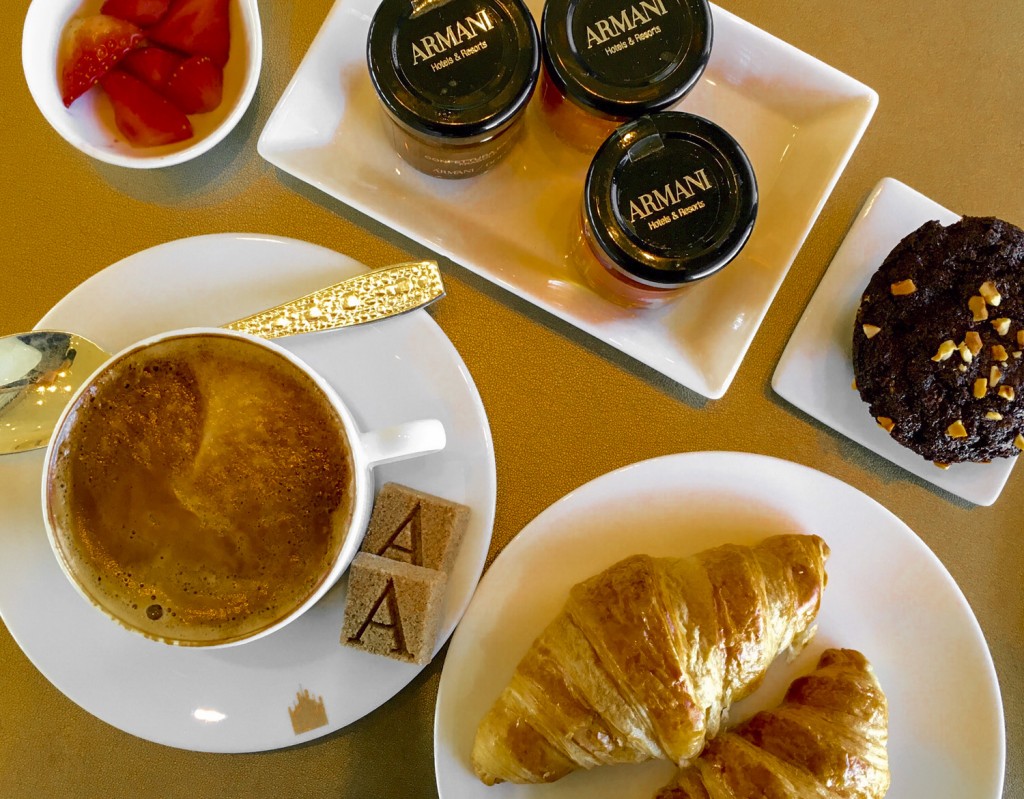 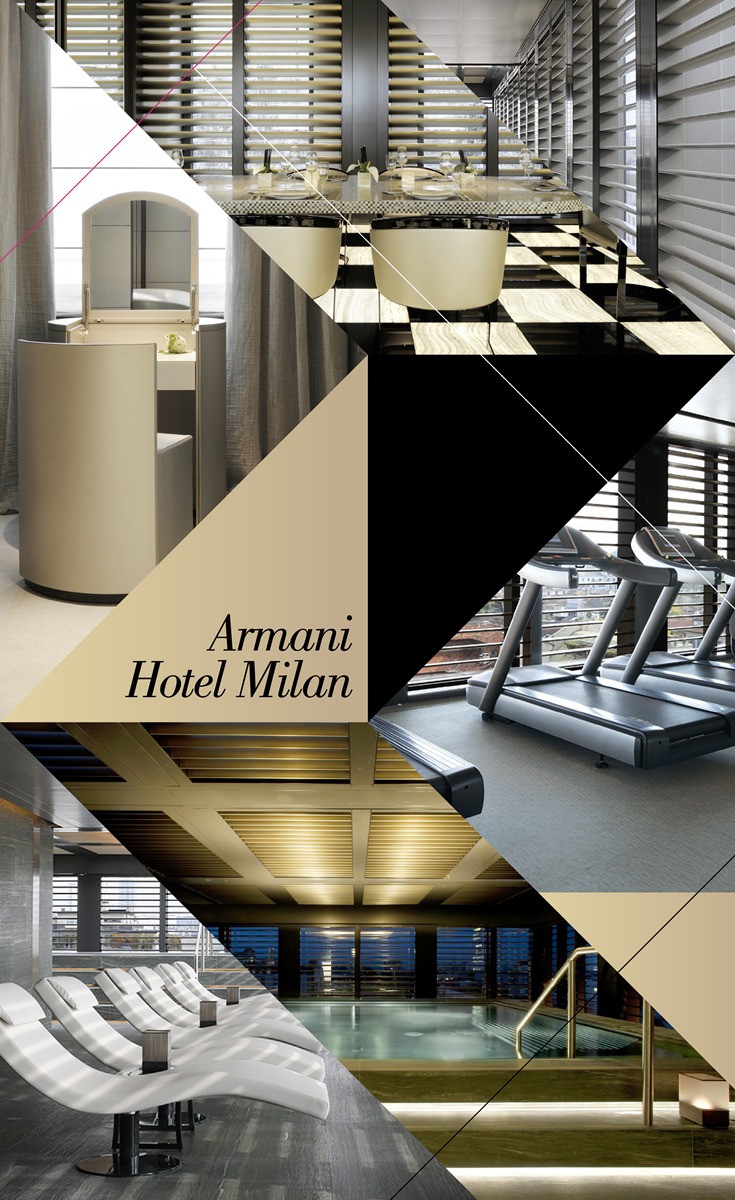 And then there is the spa …

Housed on the top floor of the building, it’s the only soaking pool I’ve seen with floor-to-ceiling louvered windows and roof which make you feel as though you’re outside gazing at the spectacular view and the sky at the same time.  While some might gravitate to the 24-hour gym to burn off that second helping of bucatini, I opt for the less strenuous approach – a sauna and a body wrap.  Well, my personal spa coach told me it was just as good for me as working out.  Or at least that’s what I think she said – my Italian may not be great.  But the experience certainly was. 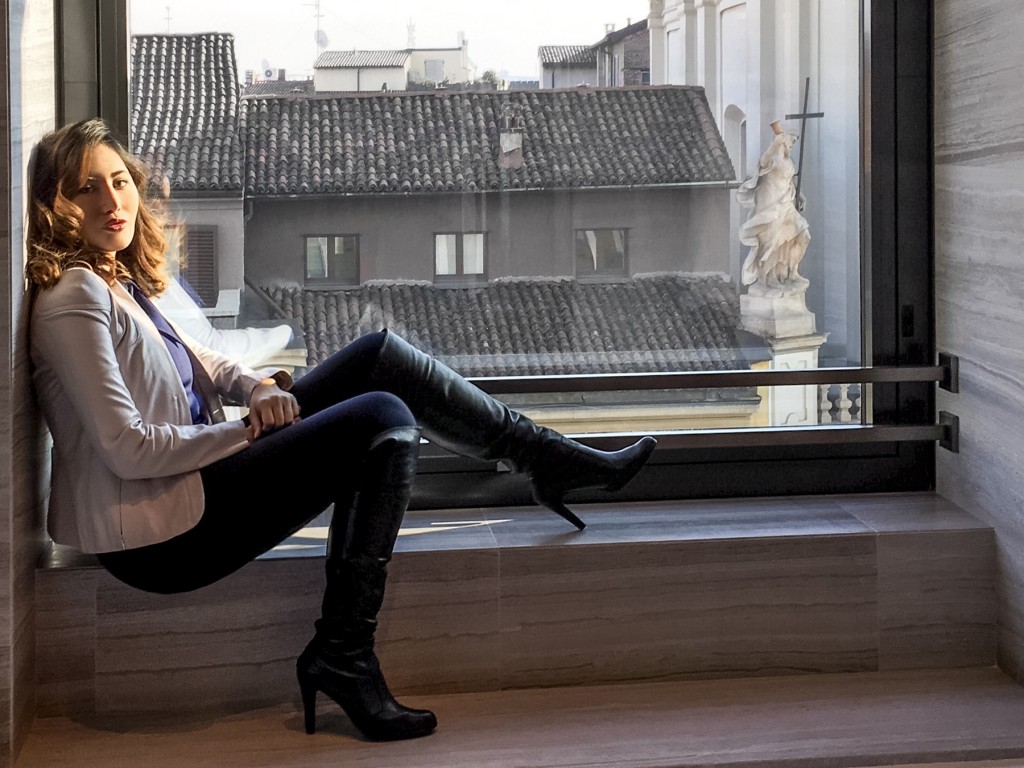 We all have mixed feelings about New Year resolutions but most of us love NYE parties. And what’s a party without some champagne? (Also it’s the only thing that doesn’t give me a raging hangover the day after). And because it’s National Champagne Day, I’ve also jotted down TA’s favorite champagnes and where to find them. Because no matter where you’re celebrating NYE tonight, make sure you do it in style. 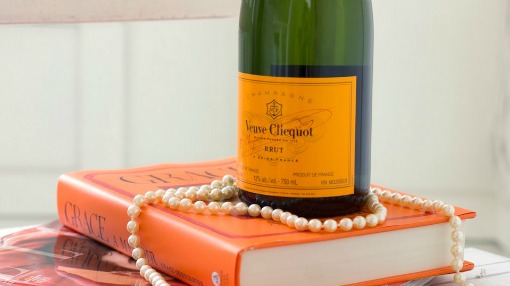 Think the lightest of rosés corked into the prettiest pink bottle. A bold floral scent with subtle floral and red berry flavors with just a touch of acidity. A history note: The Lanson house dates back to 1760 and was awarded the Royal Warrant in 1860 by Queen Victoria. To this day, they supply the British Royal family with their famed champagne. So, it’s safe to say this label knows its stuff.

Never boring, buttery like a biscuit with a hint of candied lemon zest. Don’t you dare try to age this champagne, enjoy it for its fresh crispness. The best part: Clicquot is famed not only for its divine wine but for the courageous woman behind it. Widowed at 27 in 1805, Madame Clicquot took over her husband’s business and under her management and cleverness, she transformed the company into the powerhouse it is today.

I’m also in love with the creativity that still exists in this brand, even their box designs are spectacularly adorable. 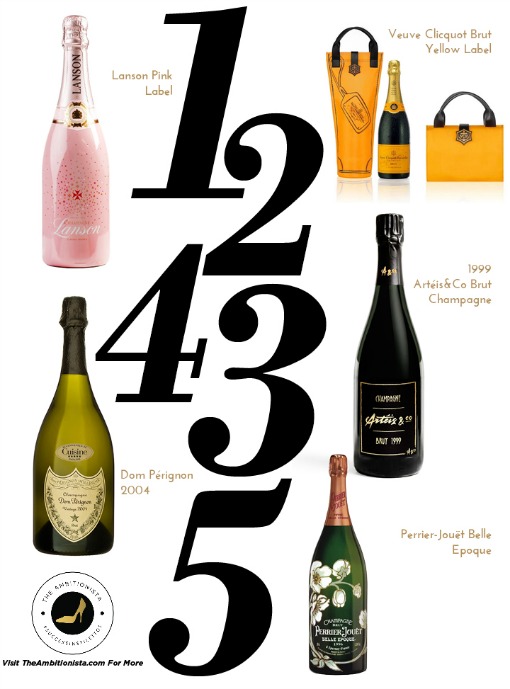 For an especially grand occasion ($500, oof), go for the 1997 Champagne Salon. If you can find it. The bottle, rebelliously designed by French graffiti artist André Saraiva, is liquid gold packing punchy apple aromatics. Then it melts on your tongue and we hope you have something to hold onto when it does.

The granddaddy of champagnes according to every bottle-popping enthusiast. Toasty brioche and almond notes with a long, smoky aftertaste (one of the reasons its so coveted). When you first pop this Dom open, you get a whiff of peaches, which is enough to get anyone salivating.

Silky, slightly spicy and effortlessly elegant. Discovered this champagne when someone opened a bottle mid-cake binging. Now I can never eat chocolate torte any other way.

In case you waited ’til the last minute (again, don’t worry, we did too), here are a few essentials to party in style tonight: